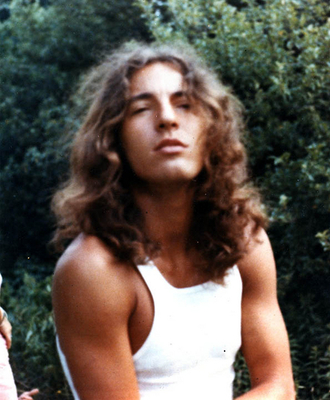 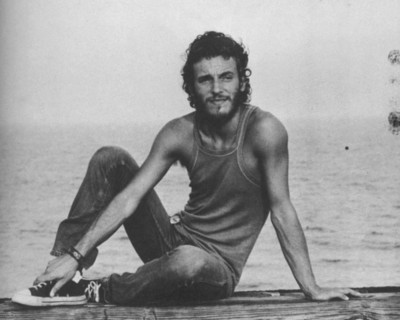 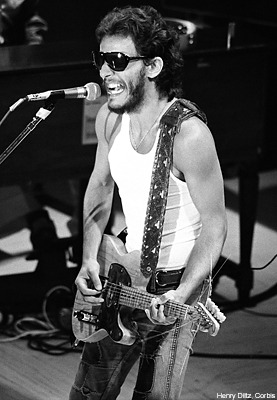 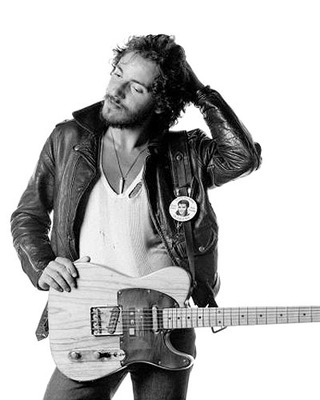 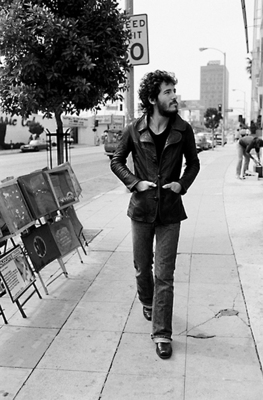 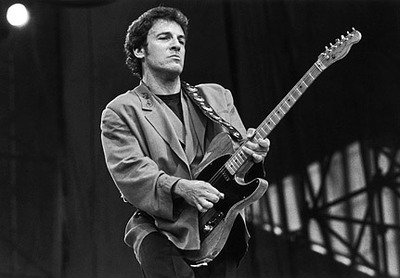 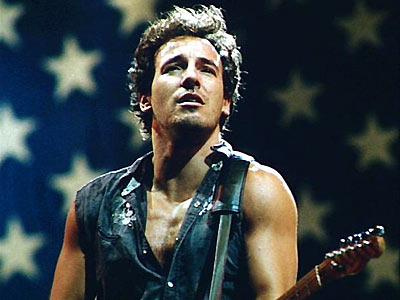 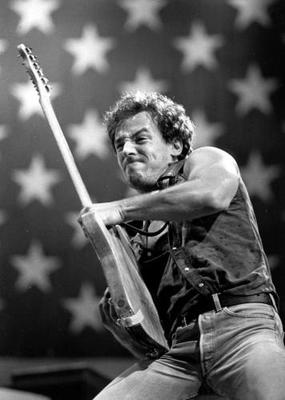 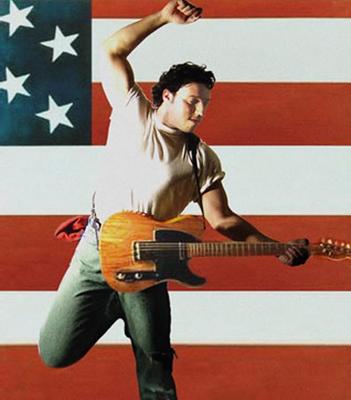 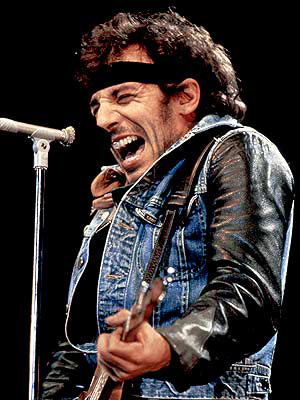 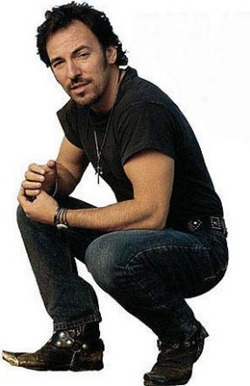 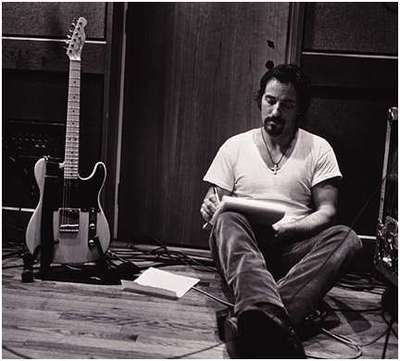 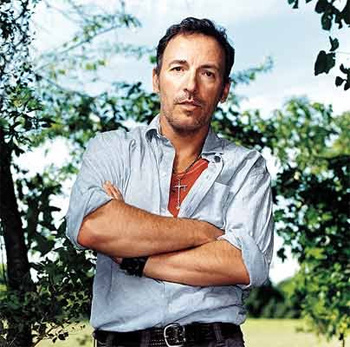 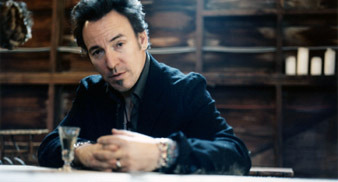 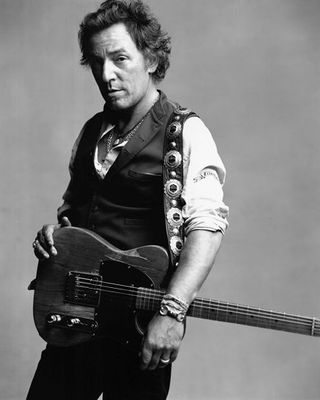 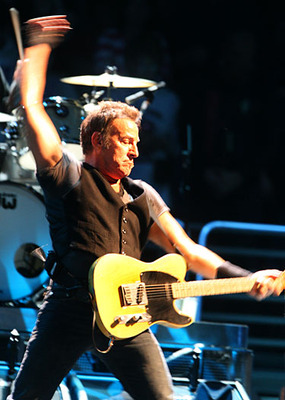 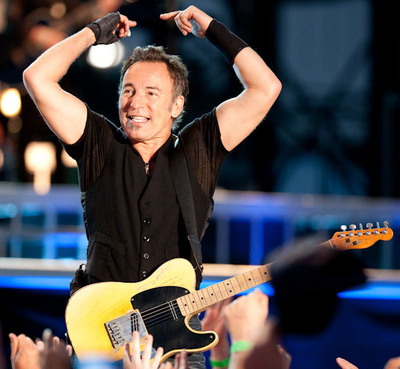 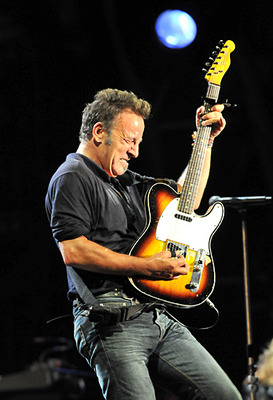 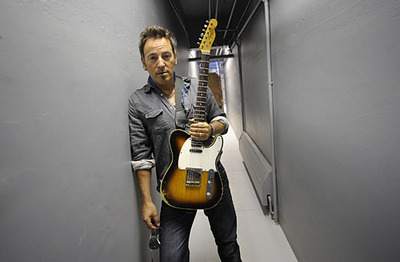 It’s pretty hard to believe how old some of my idols are getting these days. But to say that Bruce Springsteen is turning 60 today seems even harder to fathom. The man that always embodied everything that makes Rock & Roll so great. The exuberance, the hope, the faith, the fear, the passion, the dedication, the journey, the love, the angst, the epic, the youth. The youth, that last one man. 60 years old, the line, “We ain’t that young anymore.” from ‘Thunder Road’ couldn’t be more perfect for the moment. One thing that I can take solace in though is Springsteen seems to defy aging. Sure he looks around 60 (even though I personally believe he didn’t start aging till around 2004), but make no mistake about it, he is STILL THE BOSS. If you’ve never seen a live show of his, to this day, they are still marathons that are truly something to behold. He’s getting up there in years, but his shows now are some of the greatest ever. And it’s not only Springsteen himself, but the E Street Band seems to still be on top of their game as well. I’ve been to two of his shows now this year, both being 3+ hours long. Now before you go off saying other acts play that long, 1.) They are probably not even half his age 2.) They’re probably jam bands who just stand stationary 3.) You’re seeing multiple acts during that time slot. For a man who’s 60 it still puts me in awe the amount of physicality he puts into his shows. You know the Boss will never let you down. While some of his other peers lost their way under substance abuse or other misfortunes, Bruce stayed the course and chose to stick to making great music instead. THAT is why he’s the Boss. Well just one of the reasons, but that one I might admire the most. An artist, a man that you can look up to, that your children, your grandchildren can look up to.

How about the show? It was incredible… again. An opener is NEVER needed for Springsteen. Despite having reserved seats this time, I still didn’t let it hold me back from getting wild and probably stinking out the joint, or at least those immediately around me with B.O. and pry some farts that snuck out too. Anyway, Bruce came out with the E Street Band a little after 8:00pm like a gangbuster. The House Party rockin’ ‘Tenth Avenue Freeze-Out’ began the good times flow, followed by the fist pumping ‘Badlands’, a song that must have the Gods somewhere with two fist pumps in unison shouting “BAD-LANDS!” It’s always truly something to behold. It was a great thrill to hear ‘Candy’s Room’ with Max’s jet propulsion drumming and Springsteen’s spiraling guitar solo. ‘Outlaw Pete’ was incredible and appropriately enough got PJ jacked. ‘Hungry Heart’ was great to hear live for the first time and was a huge crowd favorite. There was the pile-driving rocker ‘Seeds’ that Moss was banking on. “FUCKIN’ SEEDS!” -Matt Moss. ‘Johnny 99’ was transformed from a sparse acoustic arrangement once again into a muscular rockabilly jam, followed by Nils Lofgren melting faces and exploding heads during a blistering solo to close ‘Youngstown’. Bruce then took requests that began with a great cover of the Stones’ ‘Satisfaction’, ‘Cadillac Ranch’, and the unstumpable E Street Band pulled through on ‘The Wanderer’. I was really glad to hear ‘Incident On 57th Street’, not only cause it’s one of my favorite Boss tunes, but because it was great to have one of PJ’s favorite obscurities played. A great rendition too. As Springsteen cut through the arena with a solo to close out the song I’m thinking, “Man I’m so used to this song roll effortlessly right into the raucous rave-up Rosalita on the album. How great would it be…” Then without missing a beat the band roars into ‘Rosalita’. Incredible once again. Man I love that song, it’ll put me in a great mood no matter what. Bruce then rolled out several great tunes from The Rising with the classic ‘Promised Land’ sandwiched in there. When ‘Born To Run’ hit the Des Moines crowd I knew I should probably tone down my howling and singing when I could taste a bit of blood in the back of my throat. ‘Thunder Road’ was fantastic, and the outro is still the greatest in Rock & Roll. ‘American Land’ was great, a song that will make you want to slam a pint and then whip the shit out of some Yankees fans. He closed it out with ‘Dancing In The Dark’ followed by ‘Glory Days’, sending everyone home happy thanking the audience for a great ‘Birthday Party!’. Bruce and the band exited the stage around 11:30pm. Here’s some extended details from Backstreets…
September 21 / Wells Fargo Arena / Des Moines, IA Notes: (Courtesy Backstreets.com)

Bruce and the band hit Des Moines just two days before Springsteen’s 60th, the closest we’ll get to a birthday show. Lots of “Happy Birthday” signs scattered around, including those words emblazoned across the shirts of two women in the crowd, who got a lot of screen time. There wasn’t a full house for the party, with much of the deck curtained off, but as is often the case, Springsteen seemed to work harder because of it. 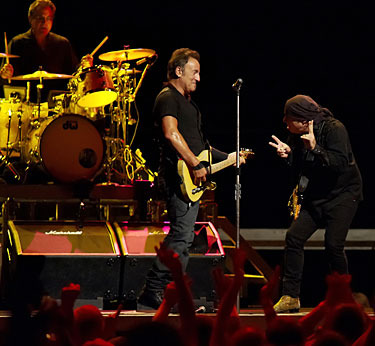 It was an energetic show from the start, kicking off with a powerhouse trio of “Tenth Avenue,” “Badlands,” and “Candy’s Room,” with a blistering solo from the birthday boy. Max pounded the drums all night. “Two Hearts” included the “It Takes Two” outro, and by the sixth song, Springsteen circled the pit on “Hungry Heart” for the third show in a row. Tonights Recession Trio wrapped with “Youngstown,” Nils again blowing minds with his solo. 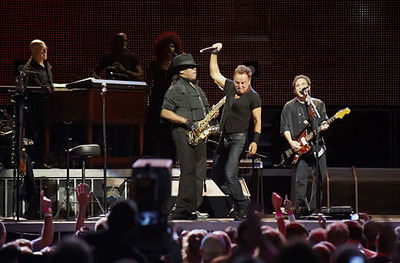 Then came a choice request set. In a WXRT interview this morning, Little Steven called the recent E Street Band world debut of “Satisfaction” “one of the greatest moments of our career.” Tonight they reprised it, bashing out the Stones classic for the second time ever. “Cadillac Ranch” followed before another first: Dion’s “The Wanderer.” Bruce and the band had a particularly long meeting before this one, but soon enough they were working it out, with an impromptu lyric change: “I tear open my shirt, I got Rosalita on my chest!” The sign for this one read, “The Wanderer… Stumped?” After their performance, Bruce tore the sign up. You can request “Incident on 57th Street.” And Bruce and the band might play it, and you know it’ll be good. But you never know just how good it’s going to be. Tonight’s was stellar. Bruce stretched out his solo, and this was one for the ages. To top it off, they followed it, just as on the Wild & Innocent album, with a rare mid-set “Rosalita.” (Sorry, no “New York City Serenade” to close it all out.) A couple songs later, a rare “Into the Fire” was an extra request, Bruce propping the sign agains the mic stand. Lovely emotional color from Curtis and Cindy.

In the encore, Steven led the crowd in a sloppy “Happy Birthday” for the Boss. Bruce had a wry smile as he sang “we ain’t that young anymore” in “Thunder Road.” But as he told the crowd, thanking them for coming out to the show, “We’re having the best times of our lives.” Which, hovering around 60, is saying something. Soon, Springsteen had an octogenarian up on stage with him for some “Dancing in the Dark,” a nice reminder that it ain’t exactly autumn yet. Wrapping it all up fittingly with “Glory Days,” Springsteen finally hollered, “Thanks for a great birthday party!”
– photographs by Andy Lyons

Thank you so much for everything you’ve ever done for me. Personally, you’ll never know how many times your music, words, and actions have saved me from certain bad turns. I owe you so much, probably a summation that I’ll never be able to add up to, so I’ll just write this letter instead on a random blog. You deserve everything great in this world for your never ending dedication to your fans and the world in general. A reciprocating loyalty between fans and performer that is unmatched by ANY other artist. From your struggles to make it to the Big Top stuck in the swamps of Jersey, to you being hailed as ‘The Future of Rock & Roll’ in the rise to rock’s pantheon, the Glory Days of the 80’s, the contemplative 90’s, and the return to glory work horse ethic this decade it’s been one hell of a ride following you. And you know what? I’d like to envision this. For guy who’s seemingly always wanted the freedom of a long stretch of highway in a ’69 Chevy, this ride has been just like that. But as he looks down at the fuel gauge, something’s a little off. Instead of the fuel amount it says 60 years. Then he rubs the dust from his eyes that must have been kicked up off the road from that last stretch from Monroe to Angeline. He looks back down and sees the tank is nowhere close to empty. With that he peels off down the road on wheels of fire he traded for wings. Born to Run indeed, and he ain’t stoppin’ anytime soon. I’ve said it so many times it sounds cliche, but once more… Thanks Boss.

Man, I dug pretty deep for that last part, didn’t know I had it in me.