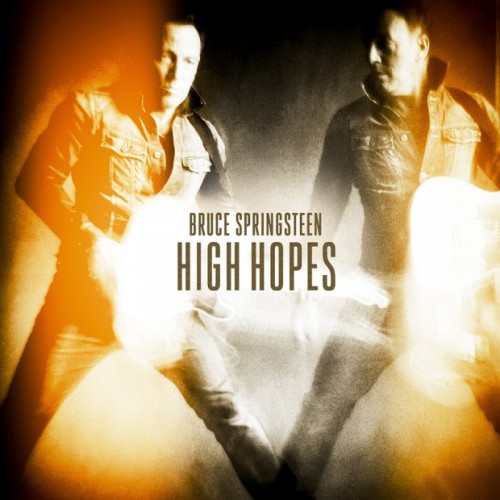 For his 18th studio album of High Hopes, Bruce Springsteen takes his most unorthodox path of constructing a record yet. A collection of castaways, covers, and reconstructions providing a fusion that Springsteen thought had to see the light of day. Fueling Springsteen’s drive even further was Rage Against The Machine guitarist and E Street understudy Tom Morello. A genuine guitar hero, Morello’s amplified alien landscapes were a lightning rod of inspiration according to Bruce himself, “Tom and his guitar became my muse, pushing the rest of this project to another level.”

After his fine work on Wrecking Ball producer Ron Aniello returns to the helm tasked with melding Springsteen’s perennially ambitious cinematic vision to Morello’s abstract guitar wizardry. The results are startlingly synergetic as Morello’s tones and squalls sound revitalizing interwoven throughout the various rhapsodies. Although the personnel is too wide ranging to be considered a true E Street Band record, their muscular spirit is felt throughout, exemplified on the opening title track. A cover of Tim Scott McConnell’s originally recorded by Springsteen on the 1996 Blood Brothers EP that was revisited on the last leg of the Wrecking Ball tour and is bolstered with flavorful horns and an incessant salsa rhythm. Bruce always being meticulous with track arrangements wanted to start things optimistically, with its exotic spontaneous nature, “High Hopes” certainly does that.

“Harry’s Place” is one of record’s finest moments and although it’s well polished sounding like a Tunnel of Love era cut it’s one of Springsteen’s grittiest character studies in years. The big city noir surrounding the tyrannical mobster known as Harry has a seedy vibe with Bruce informing you, “You don’t fuck with Harry’s money, you don’t fuck Harry’s girls.” Advice that sounds like it could make the difference between life and death. Another day in the life of these wise guys: The smoke is cleared and blood is spilled. The blurbs of saxophone and guitar sound like police sirens off in the distance but by the time they arrive on the scene… it’s too late. This is nighttime cruising music that Richard “The Iceman” Kuklinski could’ve gotten onboard with.

“American Skin (41 Shots)” has been around as a live performance since the E Street Band’s reunion shows from 1999-2000 and originally written after New York City Cops shot and killed an unarmed Amadou Diallo in 1999. An appropriate time for this track to resurface and receive proper studio treatment in the wake of the Trayvon Martin incident as well as the endless litany of mass public shootings, it’s more relevant than ever. Distorted vocals haunt the background and Morello shines for the first time on “American Skin” with his soaring guitar playing, like a supernatural compass for wayward souls.

“Just Like Fire Would” is another cover, a tale of jubilant longing and devotion this time from Australian punk band The Saints before cooling into the tremendous outtake “Down in the Hole” from The Rising sessions. With the same chest-bursting sincerity of “I’m On Fire,” it’s a retelling of events transpiring in the aftermath of 9/11 as Springsteen laments, “I got nothing but heart and sky and sunshine, the things you left behind, I wake to find my city’s gone to black. The days just keep on falling, your voice it keeps on calling I’m gonna dig right here until I get you back. Fires keep on burning, I’m here with you in the cold.”

“Heaven’s Wall” is another ethereal vantage point that transitions to the phenomenal “Frankie Fell in Love.” Springsteen feels gob-smacked by the unbridled intoxication of love, a truly rousing song that would feel right at home with some of the other exhilarating rockers on The River. “This is Your Sword” dabbles in rollicking Celtic music that Springsteen has been involved with more frequently followed by the lilting strings waltz of “Hunter Of Invisible Game.” Its lush beauty veiling the true heartbreak as Springsteen sings, “We all come up a little short and we go down hard. These days I spend my time skipping through the dark. Through the empires of dust, I chant your name. I am the hunter of invisible game.”

The most controversial move on High Hopes is the radically transformed version of an undisputed classic, “The Ghost of Tom Joad.” Although this adaptation is no new revelation to the majority of the Springsteen faithful as this version with the full E Street Band has been played live multiple times, even featuring Morello on several occasions over the past few years. With Springsteen and Morello trading verses, the stark baron wasteland of the original is replaced by a fully-armored insurgent march of electricity. Morello’s transcendental wailing and screeching of guitar is a prodigious jolt, an atomic shockwave and guerilla warfare proclamation. Completely reimagined, “Tom Joad” morphs from bleak requiem to defiant rally cry.

“The Wall” refers to the Vietnam War Memorial in Washington D.C. paying tribute to the lives lost in a conflict that defined a generation. A eulogy that Springsteen culled from his deepest fathoms for friends he lost in Vietnam as he grieves, “This black stone and these hard tears are all I got left of you now.” There’s also the visceral survivor’s guilt, were it not for a failed Physical decades ago, Springsteen (Who was legitimately drafted for the war) may have been one of the names on that wall. If you believe in divine intervention, Springsteen just might be living proof of such a thing.

The closer “Dream Baby Dream” is one of the most obscure finales in Springsteen’s catalog. A cover of electro-punk duo Suicide from their 1980 LP is another dramatically altered rendition. The pulsating original has been converted to a swaying Elysian psalm that could be seen as a cumulative benediction, purposefully placed in the exact spot it should be.

2012’s Wrecking Ball was engineered as a modern day folk album so it should come as no surprise that Bruce treated High Hopes with an archivist’s approach. Not only of his own music, but cherished obscurities by other artists he also held in high regard. The lack of a linear narrative hinders the album at times, but only slightly. In fact some may even feel this record sounds more like a unified effort than the Ellis Island melting pot of Wrecking Ball. At its core High Hopes is still rich with the prevailing themes that are abundant in Springsteen’s oeuvre: Faith, love, loss, redemption, and triumph amongst others. As for Bruce’s prolific output in the latter days of his career, it doesn’t appear he is planning on retirement anytime soon. With plenty of material left to excavate and revive along with a continuous outpouring of new ideas, Springsteen made this keen observation, “It’s like that old story. The light from the oncoming train focuses the mind.” 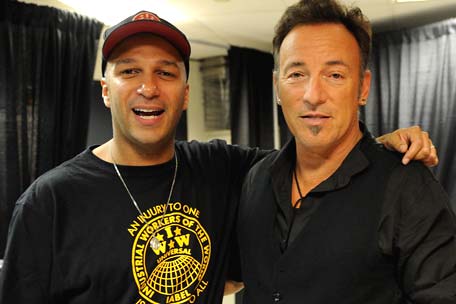